A dog was my wish for many long years.
Everything has  started during the summer holidays, year 2011 ...
Somewhere in Czech Republic in a small village, where I was on holidays at my uncle and aunt,  I met aussies for the first time ...
Neighbors have had kennel (z - Bucavky) and they were breeding australian shepherds.  There I met this beautiful character and totally fell in love with this breed.
In next months I was reading  about aussies, because I wanted to know more, on dog shows I was meeting other breeders with their dogs etc. No other breed wasn't so perfect for me as australian shepherd.
First my parents of course didn't allow me to have a dog, we had many quarrels, but when they saw how much this dogs really mean to me, they allowed me to have dog, but under the condition that it come barely in summer 2012, if I change my mind - but I didn't.
And than I started looking for kennels and litters, which would be right for me.  First I didn't have luck, because many litters were canceled or there wasn't a suitable dog for me.  But than the breeder, Anna Horakova from kennel z - Bucavky proposed me kennel Puella Fera.  Litter, which was born one week later,  was perfect, wonderful parents, characters also. I was hoping that one of this awesome puppies will be mine - and now is! 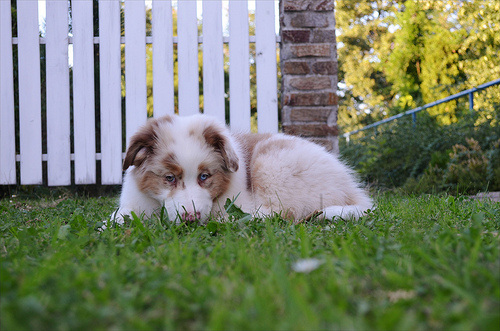